I'm sharing this story so that it may help others going thru a rough time.  Please don't feel sorry for us because sorrows aren't what we need, we are rejoicing & praising God for giving us life.  We ask that you pray for us as we continue this journey.

"They Call Her Baby"

They call her baby
We call her Mylah, Mylah Roberta Perkins
I am her mother
Juwan is her father & she is our child.

Most of you know Juwan & I have been trying for a child for almost 2 years. It had been a time of up & down & very hard mentally & emotionally.
So you could understand the excitement & joy that we experienced once we found out that we would be expecting our first child in March 2012.
We prayed for a child & God blessed us with our hearts desire.
The pregnancy has been going great, better than I ever expected.


There has been a lot going on this last week regarding our unborn child.
Wednesday we had an appt to have an ultrasound to make sure our baby was developing as he/she should. We also hoped to find out the sex. Surprisingly during that visit the doctors found some things on the ultrasound that alarmed them. A heart defect & a cyst on my umbilical cord right at the baby’s stomach.  We were at the office for about 3 hours having ultrasound after ultrasound. This news was a total shock but we were praying for the best outcome.

The physician advised us that these 2 things found were consistent with possible birth defects that could mean a chromosome abnormality (such as Down Syndrome) and a amniocentesis was recommended. But how could the baby have a heart defect? The heart was beating so strongly & there was nothing seemingly wrong with the rhythm.

I’d been given the opportunity to have a amniocentesis done earlier in my pregnancy but declined because if something was found there would be nothing that the doctors could do to fix the problem, but now I needed to know what was going on with our child. The amniocentesis & a meeting with a genetic counselor were scheduled for Thursday & a fetal echocardiogram was scheduled for Monday morning to focus only on the baby’s heart.

There was a 3rd finding in the ultrasound that the physician advised us not to worry about because the baby was still young; clenched hands. Usually babies in the womb open & close their hands with movement, but our baby only held tight fists. After taking all of this in I became an emotional wreck, I had not prepared myself for this news, what parent would?

That night I spent a lot of time on the internet researching birth defects for babies with clenched fists. I came across something called Trisomy 18 or Edwards Syndrome. The information was very shocking & was something I prayed my child did not have. The children were deemed as incompatible with life with a slew of health problems. I read how most children were born stillborn & if they were born they didn’t live very long; some weeks, some hours. I read about how most mothers given this diagnosis decided to terminate the pregnancy.  Terminate the pregnancy? A late term abortion to kill my baby? I wasn’t sure if I could give birth to a child with all these problems and I thought I was firm in my beliefs regarding abortions.  I continued praying.

Thursday my mother & I arrived for the meeting with the genetic counselor who explained chromosomes & birth defects. I could only stare into space & wonder “How did I get here?” She assured me that chromosome abnormalities were not the fault of anyone and that Juwan & I did nothing wrong. She did say that we had a couple things working in our favor & one was the baby’s size. She said the baby was at a perfect size & was growing normally.

The amniocentesis was a painless procedure. Amniotic fluid was extracted from around the baby & would be sent to a lab for testing to check for any chromosome abnormalities. The results would be back Friday or Monday at the latest. I also had another ultrasound, during which the tech advised that our baby was a girl. The baby turned to the ultrasound screen & her hands seemed to motion thumbs up.  She would be called Mylah.

Friday, I did all I could not to be by the phone I kept myself as busy as possible, & the phone call from the hospital never came. I had feelings of both disappointment & relief. I could enjoy my weekend. I continued praying asking God for a miracle & to protect my unborn child and also to give me strength & provide direction for what was to come.

Saturday, we went along with our gender reveal party, which was something Wednesday I was against but my husband & father encouraged me to go on with my plans.  Everyone enjoyed themselves & it was revealed that Baby Perkins was a little girl.

Monday came & it was time for the echo-cardiogram. While waiting for this appointment I called the genetic counselor to make her aware that I would be at the hospital that morning in case she tried to reach me with the results of the amniocentesis.

The echo-cardiogram was a long procedure, basically an extra long ultrasound only focusing on the heart, on Mylah’s heart. There it was, that heart beating strongly & in rhythm, I thought what defect? I was told to go to the bathroom to see if Mylah would switch positions for better views. While in the restroom, I had a conversation with Mylah, I asked her to unclench her hands & to move around for mommy.
After the echocardiogram & other ultrasounds were done, the doctor hit us with another blow.  Mylah’s brain was not developing properly & there was something missing. My child, my poor daughter what was I to do.

The fetal medicine doctor wanted us to speak to the genetic counselor while we were there so they placed my mother, husband & I in a room. Then the phone call came and my worst fears were confirmed. The amniocentesis FISH test confirmed that Mylah did have Trisomy 18. A 1 in 5000 chance & it was my baby.  The genetic counselor scheduled a follow up visit with her & a fetal medicine physician the following day.

I don’t think I’ve felt so much pain in my life. The baby I’m carrying had been diagnosed with one of the more severe chromosome abnormalities that a baby could have. I spent the rest of the day crying & in pain. Nothing could comfort me. I kept asking why my baby? I would have been a good mother. I later resented those words, because she wasn’t dead & I was still her mother.

Tuesday, we met with the genetic counselor, a social worker & 2 Fetal Medicine specialists from the hospital. They explained the findings to my family & the options that we had with this diagnosis.
We could carry on with the pregnancy until Mylah delivered, but there was a possibility that Mylah would be born stillborn & that if she was born alive there was a chance that she may only survive for a short time. They explained that most babies with Trisomy 18 don’t live past the first year of life & that if they do there would be many problems with her.  If we decided to carry on with the pregnancy we would only be given prenatal care, there would be no fetal monitoring, no listening to the heart, no more ultrasounds to check on the baby even during labor because as it was said “the babies fate is already sealed”. I was hearing correctly, they were giving up on my child before she even got here. Up until that moment I hadn’t felt Mylah kick at all, just flutters. After the doctor uttered those words to my family, my baby kicked, a nice swift kick from the long legs which resembled her father that I had admired in the ultrasounds. She let me know she heard those words.

The other option was to terminate the pregnancy with one of two procedures. One being induced labor & giving birth to a child whose heart would be stopped before she entered the world.  The heart; that strong beating heart.

Right there I knew what I had to do the option of termination was a thought a few days ago. I prayed for guidance.  Browsing the internet over the weekend I came across many families whose babies had survived labor & delivery, many made it months, some made it years & are still living. Who was I go give up on my baby just because science said so?  We had prayed for her, we wanted her, we asked God for this baby. She is our baby.  She has a head, a brain, a body, 2 legs with feet & toes, 2 arms with hands & fingers, that heart, strong & beating & those clenched fists which confirmed Mylah was a fighter & as her mother I was going to fight the fight with her.
I advised the doctors that I didn’t care about heart defects, brain defects, clenched hands or flat feet. I saw a heart, a beating heart, one that GOD gave her. He gave her life and I was no one to take it from her. Terminating my pregnancy would be killing my child. The child I asked God for and I would carry her until God decides to take her from us.


This is going to be a long, emotional, journey. We are staying prayerful & trusting in GOD & his abilities. He has given us the best gift that parents could receive and that is the gift of life.   I won’t give up on my child like others have.  She is my child & I am her mother, Juwan is her father & she is a fighter and I will fight for her as long as I can. 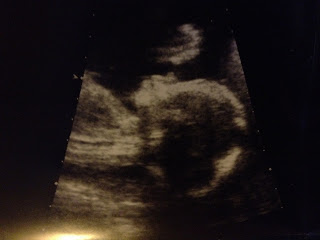 I want to thank you for your support & encouraging words. Please keep my family in your prayers as we travel this journey to meet our daughter, Mylah Roberta Perkins.
Email Post
Labels: love mother mylah Trisomy 18